Posted by CRRC-Armenia on July 28, 2009
Yerevan, Armenia. On July 28th (at 11:00 AM in the Picasso hall of the Congress Hotel, 1 Italy Street) CRRC presented results from their esteemed Data Initiative (DI) 2008 survey, which represents the 5th wave of information gathered from over 6000 households randomly selected in Armenia, Azerbaijan and Georgia.

The CRRC DI survey provides a unique opportunity to follow the socioeconomic, demographic and political developments during the last 5 years. The original dataset allows analysts to make parallels between the three countries of the South Caucasus and the developments between rural and urban areas within each country.

The survey provides an economic cross section of all three countries, revealing changes resulting from the impending Financial Crisis. Though about 57% of respondents would describe current economic situation of their household compared to others around as fair, 30% stated that they do not have enough money for food (15% in Azerbaijan and 22% in Georgia), and another 37% (33% and 39%, respectively) - enough for food, but not for cloths. The share of households in Armenia that are able to afford expensive durables and anything wanted is 5% only (10% in Azerbaijan and 7%-in Georgia).

Most survey respondents (70%) in Armenia consider the government like a parent that should take care of people, while 48% of Georgian respondents agree with the statement Government is like an employee; the people should be the bosses who control the government. Questions regarding national politics reveal diverging perceptions and opinions of the general public. Though political turmoil seems prevalent, the survey revealed that half of the respondents in Armenia say they are “not interested” or “hardly interested” in national politics. Moreover, only 24% claimed that national politics was going in the wrong direction, whereas 30% felt it was going in the right direction. Another surprising find is that in general more Armenians trust the president (49%) than they do the National Assembly (25%) or government (38%). In addition, the level of trust toward almost all the social and political institutions in 2008 was higher than a year ago. 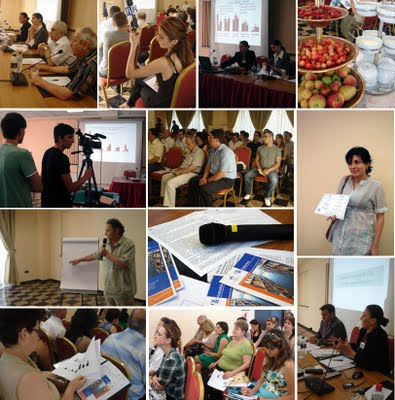 The CRRC DI survey databases and the supporting documents are freely available for all those interested in in-depth analysis and in advancing social research and public policy at http://www.crrccenters.org/.
caucasus data analysis DI presentation survey