Perceptions and State of Democracy in Armenia 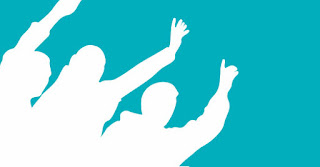 This blog post uses the results of the Life in Transition Survey (LiTS) conducted in 2010 and 2016 by the European Bank for Reconstruction and Development as well as the Caucasus Barometer 2011 and 2017 datasets, in order to analyse the attitudes towards democracy and perceptions of democratic institutions in Armenia. Those perceptions are then collated with actual evaluations of Armenian democracy provided by organisations such as the Freedom House, the Economist and the World Economic Forum.

In the academic world of economics, it is widely agreed that democracy is a necessary precondition to achieve a long-term inclusive growth and thus, broad and sustained prosperity (see for example: Acemoglu and Robinson 2013, Acemoglu et. al. 2014; Madsen, Raschky & Skali 2015). This stance prevails to some extent in Armenia – according to LiTS 2016, 66% of people pointed democracy as a preferable political system (or 48% according to Caucasus Barometer 2017). Although it falls well behind Western European attitudes, that is significantly higher than the average for the transitioning countries. Armenia has also one of the lowest levels of approval for an authoritarian regime (even lower than Western Europe), which shape at 7% or 10% as reported in LiTS and Caucasus Barometer respectively. However, the worrying fact is that the support for democracy has actually weakened over past years: down 10 percentage points from 76% in 2010 (LiTS) or down 7 percentage points from 55% in 2011 (Caucasus Barometer). Also, strikingly notable share of Armenians (27% and 31% according to LiTS and Caucasus Barometer respectively) claim that “for someone like them it [the political regime] doesn’t matter”.

There is a huge difference though between a ‘paper’ democracy (often meaning not more than holding elections of limited credibility once in a while) and true liberal democracy which manifests itself in people’s ability to control and change government, politicians being restricted by the rule of law and prevailing values of social solidarity and participation. Most Armenians find virtually all of the basic democratic values and institutions non-existent, falling far behind not only European perceptions but also those of other transitioning countries. Less than 20% respondents indicated that Armenia had law and order, fair justice system and political opposition; less than 10% believes in fairness of elections (see Figure 1). Also Caucasus Barometer results indicate that as much as 70% find the country to be not democratic at all (33%) or democratic but with major flaws (37%); only 3% considers Armenia to be a full democracy.

Figure 1. Percentage of respondents who agree that the country has these basic democratic institutions.


These perceptions seem to be confirmed by actual measures delivered by international organisations and watchdogs. Armenia is ‘partly free’ according to Freedom in the World report delivered by the Freedom House and placed on 136th place among 210 countries measured, even behind a number of Sub-Saharan African states. The Economist’s Democracy Index puts Armenia just slightly above a threshold between an ‘authoritarian’ and ‘hybrid’ regime. Moreover, the Democracy Index score has remained more or less stagnant since its introduction in 2006, while the Freedom House’s rating has actually slightly declined in comparison to the first measurement in 1998. Another indicator, Inclusive Development Index (IDI), by the World Economic Forum, although does acknowledge a positive economic growth over recent years, it also shows deterioration of ‘inclusion’ factor, meaning deepening wealth inequalities and declining intergenerational equity – features associated with extractive regimes rather than democracies.


Lack of improvement in many aspects of political and social life over the years might be the reason why people seem to remain quite pessimistic in terms of past advances as well as possible future changes. Only 13% agree that economic situation in 2016 was better that 4 years before, despite an average Armenian being 9% wealthier than in 2012 (based on real GDP per capita, World Bank Data). This perception correlates with the IDI measure – the economic growth did happen but was not followed by progress in terms of poverty reduction, unemployment decline, etc. Furthermore, merely 11% of respondents think that political situation improved over the same period (LiTS). According to Caucasus Barometer, just 10% think that the country’s domestic politics are going mainly (8%) or definitely (2%) in the right direction (see Figure 2); a staggering 46% do not believe the situation in Armenia will ever improve.

Figure 2. Direction in which country's politics is going. 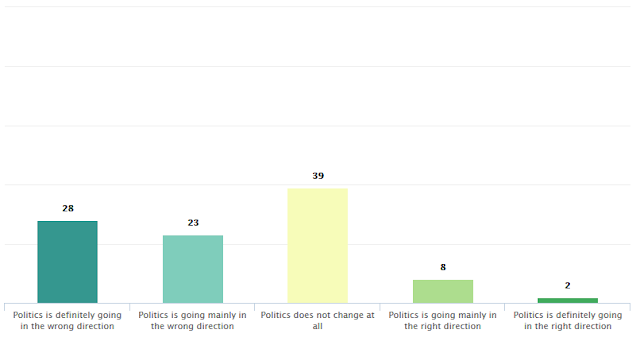 In conclusion, Armenians do realize the importance of democracy. However, their positive attitude towards it is being weakened by (justified) lack of trust in existing democratic institutions and lack of improvement of the political environment over the years. It also results in very pessimistic views on the future advancements, which might further lead to a greater political passivity. Also (although economic analysis was not by any means a purpose of this analysis), a glance at IDI measure seems to confirm the theory that democracy is indeed correlated with inclusiveness – in Armenia, better quality of democratic institutions would eventually lead to more equal growth and reduced poverty and unemployment levels.

The content of this blog is the sole responsibility of the author and does not necessarily reflect the views of CRRC-Armenia.
Armenia democracy institutions perceptions politics society